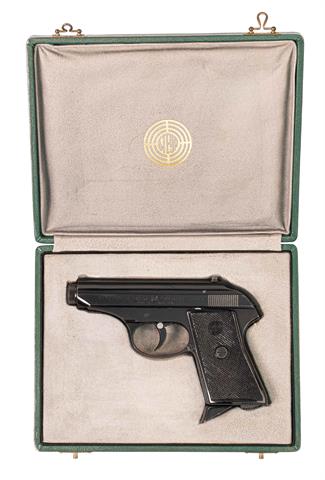 Rare modern pocket pistol. See also MÖTZ/SCHUY, Die Weiterentwicklung der Selbstladepistole I, S. . Our company, Joh. Springer's Erben (JSE), plays a special role in the history of this gun, as JSE was the representative of Steyr-Daimler-Puch AG for weapons until the 1960s and the majority of these pistols were resold by us as wholesalers. The present example impresses with its condition as good as new and the original leather-covered case with original operating instructions. proof 1960, condition I-II.